These days it has become necessary to provide a phone number for most of the service. Whether you go to a shopping center or take an online service. You have to give your phone number almost everywhere.

There are many disadvantages to giving a phone number. The first thing is that you will get lots of spam calls. In terms of women's privacy and safety, giving your phone number for every service is a bit of a waste.

Hailing from Hyderabad, Aditya has started a startup named Doosra. Aditya has told Aaj Tak.in that he aims to protect users from unwanted calls and spam while keeping privacy in mind.

You can get a new virtual number by entering your phone number through the Doosra app. By giving this number to anyone, you will be able to easily avoid spam calls. Because this number will be different from your actual mobile number. 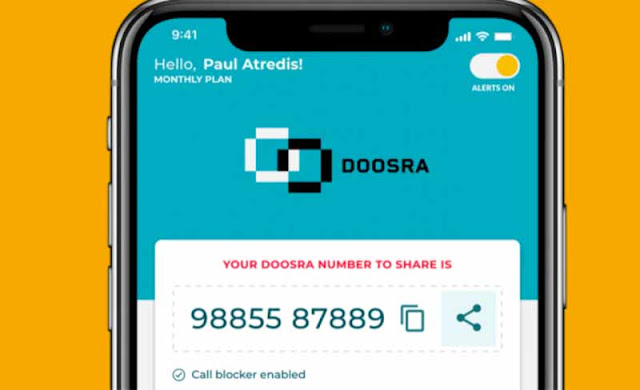 What are the advantages of the Doosra number?

Aditya, the founder of this app, says that it can protect your privacy. If you go shopping somewhere, your phone number is asked.

You can give a virtual number instead of giving your real phone number there. With this, you will get discounts and offers and your number will not be shared anywhere.

Aditya says that this can be especially helpful for the privacy of women. Because they will not need to give their number for any service or shopping.

Doosra app can be downloaded on Android and iPhone. The number of calls to Doosra numbers will be stored in the Doosra app.

Voicemail is also available here. Calls made to the Doosra number are autoblocks. But you can also un-block it by going into settings.

In the event of a call autoblock, if anyone calls your Doosra number, then you will tell them to be available, but there will be an option to record a voice message here. Voice messages will come directly to your Doosra app and you will be able to listen to it with one tap.

For the Doosra app, this startup has partnered with Zomato, Swiggy, Ola, and many similar companies. Under this, the calls of these delivery services are not autoblocks and you will be able to pick up the phone for the delivery of food or products.

How the Doosra App Works?

We have spoken to Aditya, the founder, and CEO of this startup. They have said that for this they have partnered with telecom companies. Under this, customers are provided with a virtual number.

Doosra founder Aditya has said that he has done this to avoid fraud. That is, you will receive calls, voice messages, and messages from virtual numbers.

How are the app interface and experience

We have used the Doosra app. The user interface of the app is easy. Can easily block and unblock calls. Calls, voice messages, and message options are available in the app.

By opening the app, you can see how many calls have been received, listen to voice messages, and see text messages.

In this app, a feature of location-based call unblock is also given.

There are two ways to unblock calls. One time based and the other location-based. You can unblock all calls for up to 60 minutes based on time.

If you are at a particular location and want all the calls to be unblocked then you can do this too.

It is necessary to have an Indian SIM to use the Doosra service.

For this service, you must have a SIM from India. OTP will be sent to you after entering your number on the Doosra app or website. After validation, you have to choose a plan.

After choosing the plan, pay and after that, you will be given a new number of 10 digital. You can give this number anywhere in the shop, for a discount offer or to tele callers.

The founder of the app says that this app will be beneficial for women's safety too. Because if women share their number for any delivery service or inquiry, it happens many times that they are harassed by multiple calls.

It is not a free service and customers have to pay for it. Right now there are 6-month and 12-month plans from which you can choose one.

The special thing is that if you want to get a VIP number after subscription, you can do that too, but for this, you will have to pay separately. No money has to be paid separately for the normal number.

Popular posts from this blog

Why government helps to start-up business in our country?

October 27, 2020
The Government of India has taken several initiatives and policy measures to promote the culture of innovation and entrepreneurship in the country. Job creation is the biggest challenge facing India. With a significant and unique demographic advantage, India has immense potential to innovate, generate jobs, and generate jobs for the benefit of nations and the world. In recent years, a wide spectrum of opportunities has been created by the Government of India to nurture new programs and innovation in many areas. Connecting with education, industry, investors, small and large entrepreneurs, non-governmental organizations for the lowest sections of society. Recognizing the importance of women entrepreneurship and economic participation to enable the growth and prosperity of the country, the Government of India has ensured that all policy initiatives are geared towards enabling equal opportunity for women. The government wants to bring women to the forefront of India's entrepreneurial
Post a Comment
Read more

Top 19 Apps that can improve your productivity guaranteed

October 27, 2020
Procrastination is a universal struggle and when you fall prey to it it is important to remind that a) you are not alone, and b) you are not lazy. Conversely, most delayers will tell you that they are doing a lot of work but feel that they cannot. This is usually because they are crippled by the complexity of their to-do list or the sheer number of tasks; Don't know where to start, Or just feeling like the day is getting out of control due to waking up or being disturbed by the morning routine. To make matters worse, good, productive working habits can be as difficult as developing unhealthy time-wasting routines, such as brainwashing through social media. Luckily, there are many incredibly useful tools out there that can help you face many problems that cause nearby dysfunction. Many great, easy-to-use apps encourage good work and sleep habits; Help you stay on the task by avoiding the trap of laxity; Focus your attention on completing one task at a point; And create new workflows
Post a Comment
Read more

October 27, 2020
In startups, the difference between staying out of the runway and running out always takes our eyes off revenue. We do not want to do this, and we certainly do not do it on purpose. But when we run in the middle of a startup, it is a very easy task to waste time on feel-good tasks, which sounds like progress but doesn't come in any money. No entrepreneur is immune to this trap. It is a part of the drive that makes successful entrepreneurs successful. I set up a ton of startups, worked on, and advised them, and each made the same mistakes where revenue is concerned. Whether an Owner is launching his first company or fifth, there is one common fact they cannot neglect: the path to success starts with survival. The probability of survival depends on how fast you can generate revenue. The key to getting revenue fast is to do nothing else but to seek it. Here the easiest are falling into the trap and how to stop them. Mistake # 1: Raise Money Before You Are Ready No startup joins it to
Post a Comment
Read more